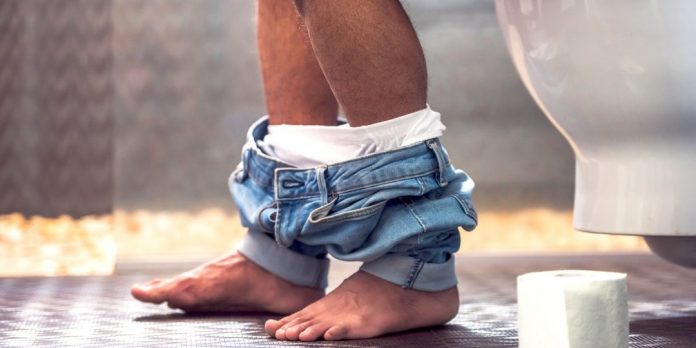 Women, pay close attention and witness the true struggle of men everywhere. This is going to be about dicks.

So, we all have a rough idea of what a dick looks like, right? There’s the dangly bits, the straight-ish part, some got a little turtleneck thing going on, and then there’s the tip. Got an image in your mind? Great.

Now, what you might not know is that the end isn’t a nice little circular hole, but an opening with two tiny flaps of skin on either side. And here’s the thing: those little flaps can get STUCK TOGETHER.

I put that in caps because I can’t stress it enough. The hole on the end of your dick can get covered over by stuck together skin. Seriously. And what happens when a liquid tries to come out of a partially covered tube? Think of your thumb on a garden hose.

Notice how the water is spraying almost 90° to the angle the hose is pointed. See where I’m going with this? Sometimes, no matter his intention, no matter his aim, a man is going to pee all crazy. Having all kinds of sticky fluids around makes it worse too. You would think it would be nice to cuddle up and go to sleep immediately after sex? Romantic, right?

Well, that shit is going to dry, he’s going to wake up in the morning half asleep, and your wall is going to get messed the fuck up. That’s a fact. There’s even a scene of this in a Jim Carrey movie.

To date, this is the only reference I’ve seen or heard of this problem in all of film and literature. Truly, us men struggle in the shadows.

Even with my best efforts, and most exacting aim, here is a list of things I have accidentally peed on: the toilet seat, the toilet handle, the toilet paper roll, a small jar of potpourri, an ornamental bunny statue two feet away, my shoes, a framed picture of a delightful pastoral scene, and the wall. I’m sure I’ve blocked a few out due to the trauma.

Now, I can already hear some of the women out there saying, “Just pee sitting down like a respectful human!” Fair enough, and if it happened all the time I would, but these events are few and far between, and always a shock when they happen. Also, it can happen when you sit down. Once while sitting on the toilet I did pee, and the angle of the stream arced up, hit the bottom of the seat, ricocheted downward and went all over my jeans. It took me a solid 5 minutes to figure out how my pants had gotten wet.

So, ladies, the next time you come into the bathroom and see that your man has pissed all over something impossibly far from the toilet, don’t yell. Hug him and say “I’m so sorry”, then hold on until the tears finish wracking his body. The struggle is real.

Additional reading: Why Men Should Pee Sitting Down