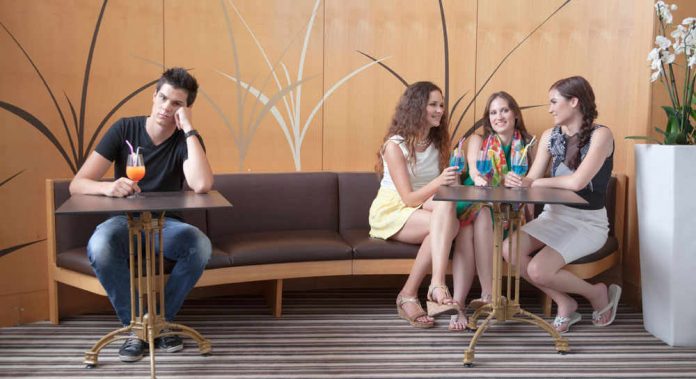 I was having coffee at Starbucks, at an outdoor table, a few weeks ago and two very fine looking ladies sat at another table. The acoustics were weird because I could hear everything they said even though they were a distance away.

One of them was saying that she was recently divorced and didn’t want to start the dating process again. She said she wished some man would just take her to bed. She was frustrated sexually and wanted it, but just wasn’t up to the dating dance.

She said I don’t want to go through everything to start a relationship. I just wish someone would just ravish me. Her words.

They were laughing and the other one said, what about him? She nodded at me. They had no clue that I could hear and I was acting like I was looking at stuff on my phone.

When they left, I followed to see where shed go. She went to an apartment complex and didn’t seem to know I was following.

When she unlocked the door, I stepped quietly behind her and went through the door before she closed it.

I wrapped my arms around her and shut the door with my foot. She yelped and asked how I’d gotten in her apartment. I had a tight grip and was not sure she could see me and know that I was the guy from Starbucks.

I pushed her further into the living room and started to caress her. In a moment, I started to unbutton her blouse. She was struggling against me but not seriously.

I finished unbuttoning the blouse and started running my hands over her stomach and the curve of her hips.

She was saying, you can’t just break in here and do this to me.

I dipped a hand into her bra and lifted a breast out, and I must say it was a beauty.

I lifted the other one out and squeezed and toyed with them.

She was saying, who are you? You can’t just break in here and do this to me.

Her hands were trying to fend me off, but not too seriously.

I slid a hand down to the catch on her slacks. Her hands tried harder to prevent me from undoing them so l slid it back to her nipple, squeezed and said, okay, you undo them for me.

She started to protest and I squeezed harder. She undid her slacks. I slipped my hand inside and started to massage the front of her panties. As I slid my fingers up and down, I mashed the fabric into her damp slit.

She tried to fend it off but as I rubbed the clit area, she quit trying to stop me.

I could look over her shoulder at her terrific figure , I was working up a lusty desire you can’t believe.

I was rubbing right on her pleasure center and she was starting to gasp and respond.

I said I want to see your tits without the bra. There was a momentary hesitation and she reached between us and removed it.

I said I wanted to see how she looked without the slacks.

She slid them down.

I told her how good she looked and said I wanted to see how she looked completely naked. she pulled her panties down and my finger slipped into the moist soft folds of her.

She was panting and dancing against my finger and I buried deeper and sought the button and lightly massaged it.

I had her on the edge of coming and I said, for this afternoon, you are my sex prisoner and you must do whatever I tell you to do, okay?

As she considered for a moment, I increased the pressure of my finger as it moved in her.

She agreed and I continued to rub just right until she came. She became limp in my embrace and I guided/carried her to the bedroom.

I sat h8on the edge of the bed and she saw who I was and said, how did you…?

I told her to take my pants off. When she did and was staring at my cock, she said, oh my gosh. It’s huge.

I said you know what a man likes for a woman to do. She said I don’t think can.

She stared another moment and then leaned toward me and then wrapped her fabulous lips around it and started working her female magic.

I am bigger than a lot of guys and looking down at this gorgeous creature, naked, with my cock sliding in and out of her mouth was exhilarating.

I stopped her before I came because I wanted to let that happen somewhere else.

I pushed her back onto the bed with her legs still hanging off. I took her with my mouth, pushing in with my tongue, opening her with my fingers exploring, enjoying and giving her everything I could with the rough texture of my tongue.

She came again unbelievably trashing like a wild animal. As the climax passed, I stood, lifted her legs and guided my cock to the gates of the Promised Land.

I slid it up and down in her wetness and then found the opening. As I slid in, she was screaming, oh hell yes. Oh hell yes. That’s it. Oh God, that’s good.

Her back was arched. Her hips were wide, giving me complete access. I started slow and increased the tempo and strength of the thrust until she was screaming, oh God yes. Fuck me. Fuck me hard.

I was slamming into her. My loins slapping against her. Her tits were bouncing with each thrust. Her nails dug into me and I did everything I could to obey her command.

When I came, I exploded inside her and she was out of her mind going nuts with pleasure.

We collapsed and lay still for a while. When she stirred, I told her to get a warm washcloth and wash me.

She did and the erection started to grow. I told her to do what a man likes for a woman to do. She sucked it again and when it was fully erect, I guided her onto her stomach, tits, and face on the bed with her ass in the air.

I entered her doggy style and we had another hot fabulous round of pleasure.

When we were spent, she said. I don’t know how you knew what I needed but you sure did.

Please come back whenever you want and do just like this. I don’t want a relationship. I just need to get fucked and this was perfect.

I’ve been back three times so far. I’ve taken her across the arm of a living room chair, on her dining table and on her breakfast bar. She doesn’t know my name.