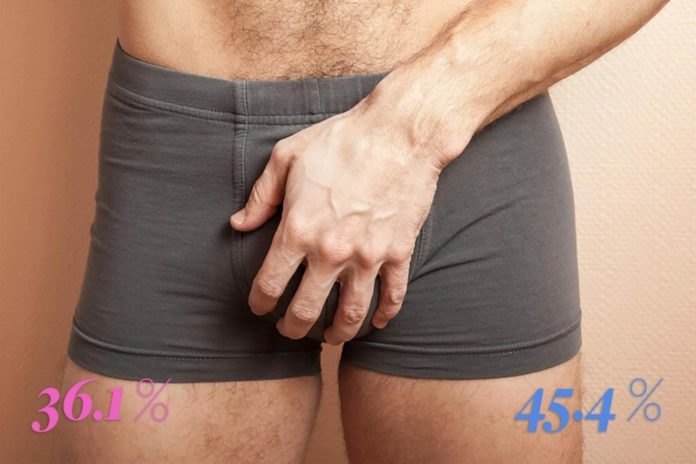 Here’s something every man will relate to, though few if any will admit to it: sniffing their fingers after touching their genitals. Be it ball scratching, penis fondling, sorry adjusting, etc, as you remove your hands, you are overcome with the irresistible urge to sniff.

You can deny it. You might try to resist the urge, even maintain some human decency, but you fail. Yes, you fail. The smell from the ‘scratch and sniff’ is like a drug to you.

Why men — all men – do this remains a mystery.

Is it a check that everything is OK down there? Primitive curiosity? One Reddit user assures that that it’s simply a matter of personal pleasure.

User “Funfungiguy.” “Alright, I’ll fess up. I don’t know if all guys do it, and I don’t do it in public or around people. But if I’m alone and scratch my balls, I definitely do it. Also when I get done working out and jump in the shower I also my sniff my sweaty briefs where my balls rested, then I’ll scratch my nuts and smell my fingers. The answer as to why I do this is actually pretty simple: I like the smell of my balls.”

User “Howmanykings.” “It’s the dpi test. If you drop a hand into your pants, give it a feel and it smells rancid… You better shower up young fella. If it smells alright, you can probably make it till later in the day… But if it smells good then get a lady, and have pants off dance off kinda party because she’s gonna hold your hands and that’s basically her holding your balls which is basically like having sexy time.”

Could it be that simple? Just pleasure? There must be some other explanation, no?

According to Biopsychologist Nigel Barber, who specializes in sexual and reproductive behavior using an evolutionary approach, neither hygiene nor curiosity is the reason for this infatuation. Barber theorizes that men do the after touching sniff to feel more alive.

Barber adds that our instinctive attraction to our own scent is the philosophical theory that recognizes the self above all else, egoism.

Women, apparently, do it too!

Farts are sort of the same way. Come on, admit it, you love smelling your own farts. Though this is strictly a guy thing. There’s some satisfaction when you smell it, and the fouler it is you think, ‘Ooh… That was a good one’.”